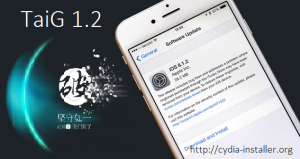 Jailbreak taig is the only windows based iOS 8.1.2 jailbreak tool by chinese jailbreakers team tai-G. They have been released some updated versions with some minor error fixes and improvements. The latest taig update is taig 1.2 English download. They released taig v1.2 soon after the release of iOS 8.1.2. It supports on idevices those are released after iphone 4S, ipad 2 and ipod touch 5g. Let’s jailbreak your device and install cydia on it.

Prepare the device for taig jailbreak

Download taig is a freeware. According to the users taig hasn’t reported malwares while or after jailbreak. So you can use this tool to download cydia more comfortably. But we do not make guarantees on them. We provided the taig download link and the correct path to install cydia on this article. Try to jailbreak and download cydia for your apple device