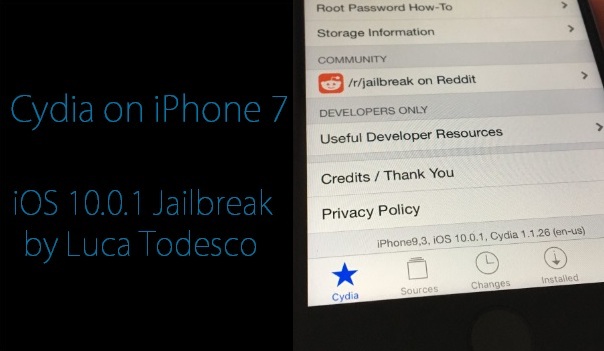 iPhone 7 jailbroken – Nowadays most of Apple users who love cydia talking about this. iPhone 7 has been used to jailbreak iOS 10.0.1. It means iPhone 7 enable to download cydia in it.

iPhone 7 models are the newest device release by Apple. Two models are developed as iPhone 7 and 7 plus. They designed both devices with additions of improvements and features. iPhone 7 is 4.7 inches and iPhone 7 plus comes with 5.5 inches Retina HD displays. Both devices have 32GB, 128GB and 256GB capacity sizes. iPhone 7 models are splash, water and dust resistant exclusively. A10 chip and 12MP wide-angle and telephoto cameras add more worth to the device.

While others jailbreak early Apple devices, it has been jailbroken iPhone 7 by Luca. This is the first we heard iPhone 7 jailbreak. He download cydia on his iphone 7 which runs iOS 10.0.1. When found the jailbreak, he posted an image on his twitter account which shows bundled cydia on jailbroken iOS 10.0.1 running iPhone 7.

The image shows downloaded bundled cydia ( cydia 1.1.26) on iOS 10.0.1 version. He also uploaded the video on this iPhone 7 jailbreak to download cydia iOS 10.0.1. He mentioned further the tool named YaluX and its free as well as untethered to install cydia iOS 10.0.1.

Take a look on iOS 10.0.1 cydia install for iPhone 7 by Luca Todesco (qwertyoruiopz)

iPhone 7 jailbreak allow users to find out more hidden features in Apple devices. When it bound with iOS 10 releases, it will mosaic than ever. iOS 10.0.2 cydia apps will give you this amazing experience for sure. Luca released iOS 10 jailbreak update earlier too. You can watch the uploaded video here and read more via below link

Not yet. None of above release their updates public yet. So still cydia iphone 7 download is impossible. But we hope any of them will released a proper update of their tools to download cydia on iPhone 7. When it update these iOS 10 jailbreak methods and release to download you will enable to install cydia on iOS 10 and iPhone 7/7 plus.

Stay with us for more updates on iOS cydia download. We also ready to inform all iOS and cydia related updates for you as soon we heard. Follow us on Facebook for more trusted news and releases.