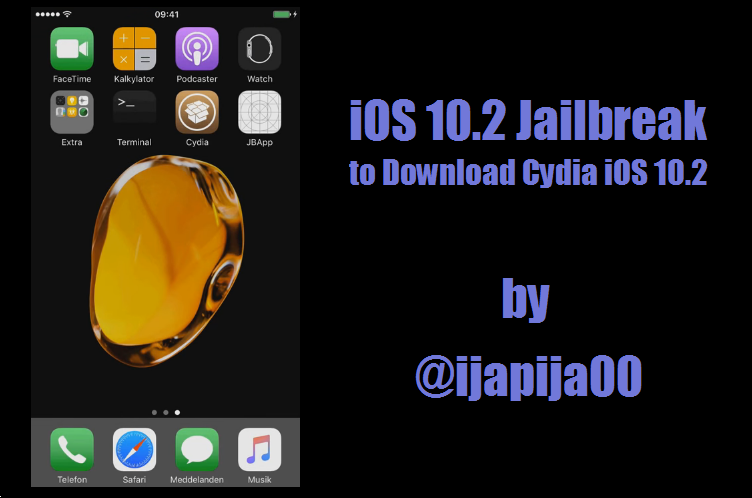 iOS 10.2 has been jailbroken by @ijapija00, who was download cydia on iOS 10.1 before that. Few days back, he uploaded a video in to youtube which shows that customization of iOS 10.1 running iPhone with bundled cydia 1.1.27 apps. With that, Luca also confirmed that iOS 10.1 can be jailbroken and ijapija00 said that iOS 10.1 cydia download method can be used to jailbreak iOS 10.1.1 too.

Now @ijapija00 the iOS hacker shows that cydia 1.1.27 latest apps and tweaks working on iOS 10.2 beta 1. Accordingly he has been updated his old jailbreak method to support iOS 10.2. Furthermore he said that this is a code injecting method to download cydia iOS 10.2 apps. This is an semi tethered tool to install iOS 10.2 cydia and he is now planning to roll out an untethered tool to iOS 10.2 cydia download soon in future. @ijapijaoo also said that,

“People have asked me if this is untethered or not. Unfortunately, I have not had time to produce an untether stable enough for 10.x – 10.2, but I am on that right now. So in a few days I might post a short video with the untether working as well.”

When he jailbroken iOS 10.1, he reasoned that why he didn’t released it to public use. Here it’s same. Again he give some reasons not to release iOS 10.2 jailbreak to public. He tweeted them on his personal twitter account.

“The major reasons for this not being published are:

What has been improved with this version of my jailbreak:
– It’s stable now and will not fail as often as before.
– It fixes all broken offsets used in 10.1 demonstration making it work on 10.2.”

When Luca Todesco download cydia on iOS 10.1.1, he tweeted some images which shows that downloaded cydia on iOS 10.1.1 running iPhone 7 device. Before that he released some videos related iOS 10 jailbreak and iOS 10.0.2 jailbreak. @ijapija00 released a video based on jailbreak iOS 10.2. And it shows the cydia installation of iOS 10.2 beta 1 release. Ckeck out the video here.

You can read more on iOS 10 jailbreak and iOS updates with our previous articles. New demo update by ijapija00 confirms that iOS 10.2 also jailbreakable and he make a new hope due to he said that, will release an untethered tool. So we can stay with a new hope on iOS 10.2 jailbreak download. For sure, many of hackers will hurry to find out a possible method to download iOS 10.2 cydia and some of them will release one for public use. Stay in touch for an update soon.