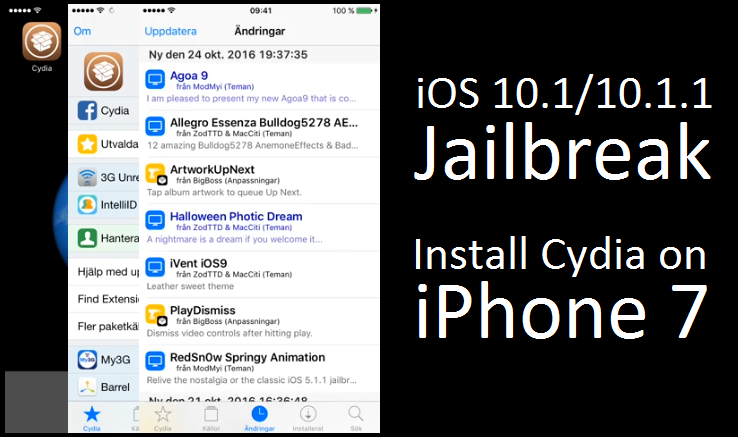 iOS 10.1 has been jailbroken! Couple of days back an iOS hacker has been download cydia iOS 10.1 using his own iPhone 7 device. According to tweets by the hacker this iOS 10.1 cydia download process enable to install cydia iOS 10.1.1 too successfully. He has been demoed on iOS 10.1 jailbreak through a video that uploaded to Youtube.

This is the first jailbreak update for download iOS 10.1 cydia. Even not Luca also passed any hint on iOS 10.1.1 jailbreak to get cydia apps. Install cydia on iOS 10.1.1 achieved by an iOS hacker calls @ijapija00. He has released a video that demos Jailbreak iOS 10.1 using Cydia substrate on iPhone 7 devices.

He also said this jailbreak download compatible to jailbreak iOS 10.1.1 as well as iOS 10.1. The video showed that the developer install few cydia packages on his iphone 7 device with iOS 10.1 cydia. He mentioned furthermore he used an one issue for this cydia iOS 10.1 install process and he was busy to found it over the last month.

But the bad news is @ijapija00 decided not to release this jailbreak solution to public. He mentioned the reasons for that decision as below.

The major reasons for this not being published are:

1. Cydia Substrate is patched by replacing a library that loads the tweaks into the system. If we would have a un patched Substrate for 10.x then I maybe would consider twice about this. But as long as it’s patched and I don’t own it, there’ll be not releases!

2.  As a single developer, I don’t want to be responsible for other people’s devices, if they break or lose something. I neither don’t have the time to help people having problems with the jailbreak process itself.

3.  Also, this jailbreak is stable sometimes and sometimes not. That means that it’s mostly used for testing tweaks or for private use and is not ready to be released at all!

Before this iOS 10.1 cydia install demos Pangu, iH8sn0w and Luca have been demoed on iOS 10.0.1 jailbreak and iOS 10 cydia download. You can check here for those early updates. They also didn’t release public, but no one complained they are fake or manually designed demonstrate videos. Anyhow stay with us for more hot updates related to iOS 10 cydia install and iOS jailbreak.